The IDW Comics universe has had such a different take on G1, one that's now significantly represented by the Generations toys, so they share a forum. A modern take on a Real Cybertronian Hero. Currently starring Generations toys, IDW "The Transformers" comics, MTMTE, TF vs GI Joe, and Windblade.
Post Reply
783 posts

I need to write out a detailed review of Fort Max, but at the moment I'm just enjoying how big this figure is. I did compare him to my Korean version of RID Fortress Maximus, and he's actually a bit taller, if far less well-armed.

Titans Return Fortress Max doesn't have the same amount of heft or armaments as the original mold, but he's taller and better articulated, as one would expect from a modern Transformer. He's a little top heavy because of the new mold's hollow legs, while original Max is solid as a rock.

Stood back to back, New Max is maybe an inch or so taller than the original.

Those look pretty good together. So do the original and the TR one, especially when laid out as a city with Combiner Wars Metroplex.
Top

Titans Return Seaspray is a funny little figure. Oddly, they gave the little minibot hovercraft no wheels this time, but he does have spinny propellers again which is nice. Vehicle mode is fairly similar to the G1 vehicle, albeit with a removable missile box on top, and a big ol' glop of barely-covered head parts between the nacelles. The head panel hinges up to accommodate a Titan Master, with a cut-out for its head to sit flush; oddly, the seat panel at the bottom is left unglued, so you can just unpeg that panel to put a figure in instead, and the instructions mention NONE of this.

Transformation has a few folding panels, and the upper body folds into itself, simple but just enough to keep it from being boring.

Robot mode has biiiiig feet, and unlike the G1 figure the ankle here is at the back of the feet rather than in the middle, making the feet seem even bigger; they're also sculpted for a wider stance rather than narrow. Because of the Titan Master cockpit, he has a big heroic chest, and if you want to add his more plump G1 cartoon look, you attach the missile launcher to his stomach panel - it's the only storage for this accessory. His head is roughly what I think of for the G1 character, it's on a swivel that's hard to use because of how close to the nacelles it's placed. His shoulders and elbows are ball joints which is a little cheap, his hips are too; his thighs are swivels, his knees are hinge joints that are bit too chunky. His fists are 5mm peg holes, but his accessory uses a tab instead which goes right behind the fist. He has tattooed on his inner forearms in Cybertronian glyph "Alanna" which is close, but not right.

Seaspray is fine, but there's something unexciting about him. He's an alright little mini-vehicle bot and it's nice to have more Titan Master cockpits in play, but his simplicity holds him back slightly.

Generations Arcee: I like this one. It does have a few problems, but for the most part, if you're looking for a G1 looking Arcee, you could hardly do better than this one. Articulation is good, paint app is great and she captures both G1 modes almost perfectly. And she comes with weapons a plenty. Two swords and two different guns with plenty of places to store all of them in both modes. The only real complaint I have is the backpack, but it doesn't hinder the movement or functionality so I can forgive it.

Generations Chromia: I like the idea of this figure better than it's execution. Using the Prime Arcee mold isn't necessarily a bad idea, but it doesn't inspire me to want that figure. It's mostly the ball joints: I literally cannot transform this thing without the legs popping off at least once and sometimes the arms do too. Everything does lock together in theory but getting it there is an exercise in frustration.

Power of the Primes:
Snarl and Sludge: Very obviously G1 inspired. I can honestly say that this is the update to this figure that I've been waiting for and that holds true for most of the Dinobots (save Grimlock who has had many more updates than the others). My only two complaints with these guys are the lack of chrome (it really makes the detail stand out) and I feel like the combiner gimmick hindered the figures a bit. Not much though and if they had to incorporate it, they did so in a way that is more or less unintrusive. Like, sludge, Slag, Swoop and Snarl do not have anything in either mode that particularly marks them as obvious combiners. I definitely recommend these if you either can't afford originals or just want updated versions of them.

Dreadwind and Darkwing: Individually these guys are decent enough. Not much to say that hasn't already been said about CW Arialbots, except that these two have an extra peg to merge together in jet modes. It doesn't work. Like, at all. It's your standard 5mm peg and hole which is not solid enough to hold them together into a single jet. Other than that, they're fairly decent, I don't regret having them in my collection.

Legends Clones: I got the two packs from Japan because I don't feel like Frankensteining the US ones together from all the different sets they're in. They're pretty decent. Good paint apps and articulation for the scale and to this day it amazes me that they were able to take 1 robot mode and make two things out of it. I do recommend these but only if you can afford the Japanese versions so as to avoid having to hunt down the other ones or wind up with figures you don't want.

Legends Slugslinger: I think he was part of Titans Return, but I never saw him at retail or even on BBTS for that matter so I just got the Japanese one. I like it. Good paint and they really changed Misfire's mold and he really feels like a completely different figure. Also, this one came with a Targetmaster which is cool, but having the Targetmaster and the Headmaster be different sizes is a little weird. Still a lot of fiddle value there, so I recommend him.
Top

POTP Snarl - pretty cool even if it is recycling some of Slag's transformation. The head does pop off a bit easily, but it's a fun piece overall.

POTP Sludge - not too shabby, I'd like to see more joints in the beast mode legs, but it's a fun figure overall. The compromises on where the beast head goes in combiner mode is laughable though.

SS Blackout - frustrating, the highs are high and the lows are pretty darn low. Lots of great sculpting, fairly authentic looking, yet very kibbly even for a movie figure, and significant problems with tolerances being too tight for the QC leading to some parts not aligning properly in both modes. Head only as high as a voyager-class, all that bulk still doesn't bring him up to leader-class TLK Megatron's height, and that's a low benchmark. Hands are uselessly angled flat like he's playing the piano. Not much deco. $50 is a lot for a figure whose shoulders cannot stay in place.

SS Thundercracker - an interesting repaint of Nitro Zeus, a figure I didn't get. Neat idea, although the jet mode cheats a bit by having a lot of robo-bulk just kinda hangin' out like it couldn't squeeze him all into his suit.

Those Dinobots look pretty good. I was seriously tempted to get Slag, or whatever he's named these days.
Top

Recent Hauls: Punch/Counterpunch is pretty awesome. They did a really good job updating the original figure and it's fun to fiddle with to boot. Yeah, it has the misassembled shoulder joints, but that's so easy to fix it took me less than two minutes. I'm really impressed with this one, highly recommended. Wreck Gar: If you have CW Groove and you like him, you'll like Wreck Gar. The interesting thing here is that it comes with the Generations Axe. Monsterbots: I'm impressed with how much mileage they've managed to get out of this one mold. Three pretty decent figures, Twinferno is the weakest of them by far, but still interesting and worth picking up.
Top

Yeah, Punch/Counterpunch is great, he's been living on my desk since I got him, love that alt mode.

Blast-Off is only ok, pretty much exactly what you'd expect and nothing outrageously good or bad.

Novastar (Firestar) is not great, this mold is pretty lame except as a combiner arm.

Nemesis Prime is really fun, maybe a touch overpriced, but for an exclusive with extra bits it's likable.

Since Studio Series Kup is branded as Generations, seems like this is the thread to post this comparison pic with G1 Kup: 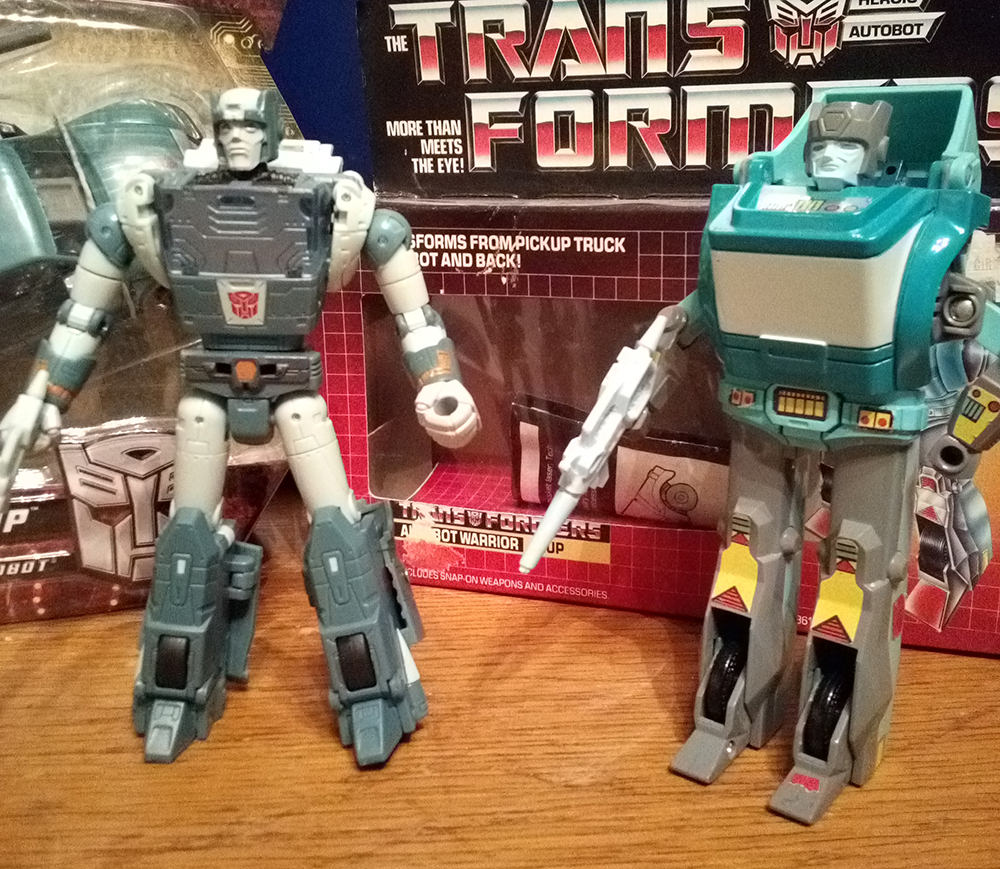 Of course the Studio series version is based off the animation model, not the original toy, but a lot of the same elements are there.
Top
Post Reply
783 posts