The IDW Comics universe has had such a different take on G1, one that's now significantly represented by the Generations toys, so they share a forum. A modern take on a Real Cybertronian Hero. Currently starring Generations toys, IDW "The Transformers" comics, MTMTE, TF vs GI Joe, and Windblade.
Post Reply
75 posts

I knew you of all people would be the one to take issue with the open box, it's always been your complaint even when it was just small holes for Try-Me packaging.

Blaster is indeed in the Kingdom line, literally hitting retailers in the last week. I am in the same boat, that clear plastic on Eject killed my interest. I'm not the biggest fan of Blaster in general but I do like the WFC system and would have ordered him if not for Eject being clear blue, that just made no sense at all.

I suspect the clear plastic gimmick will kill my interest in Legacy within 3 waves. I've already canceled half the wave 1 preorders I made.

Got Blaster (In "Kingdom" packaging) the other day. It was a lucky find that led to a bad decision that ended up working out.

Blaster and Eject: (radio and cassette)

Blaster is either a retool, or heavily derivative, of the WalMart "Earthrise" Soundwave from 2020. (The line between retooling and borrowing design elements has been blurred in recent years.) My copy has some plastic tolerance issues, making it difficult to fit the left side of the radio mode together. (I have no idea how common this problem is.)

The robot mode is stable, and has the articulation that one would reasonably expect of a Voyager class toy in 2022. Interesting, the hands are mirrored from WalMart Soundwave. The Soundwave figure's hands are molded to have one finger on the left hand extended (to press the "eject" button on his chest). Blaster's right hand is molded with a finger extended.

Eject is a good mold ruined by bad decisions. Eject fixes every engineering and aesthetic problem with Rumble/Frenzy. Better articulation, better engineering, and better proportions. If you can accept the clear plastic, I would almost recommend getting Blaster to get Eject. Unfortunately, Somebody at Hasbro decided that "Legacy" was going to focus on clear plastic for the sake of clear plastic, and Eject is moulded almost entirely in clear blue plastic. Assuming that there is no price-bump for "Legacy", it is easy enough to look at Eject as an accessory, rather than a figure unto itself.

This is the best non-Masterpiece Blaster that is likely to be released at retail. Worth getting for casual collectors, assuming it is not rendered scarce by poor distribution.
http://www.theanimalrescuesite.com/

New pictures of Motormaster and and outline of what Menasor will look like.


As bad as the "Combiner Wars" Motormaster was, it was better than this. I like Motormaster. Always have. I do not think that I could talk myself in to this figure, and I ain't inclined to try.
http://www.theanimalrescuesite.com/

All of Legacy wave 2 has been revealed with today's Transformers brand livestream.

There also seems to be a re-issue of Optimus (with Roller).

And, if you smell something, my G2 Megatron is sitting in it.
http://www.theanimalrescuesite.com/

Yeah, I didn't include that because it's an auto-converting Optimus figure made by a company called Robosen. He (along with the trailer) can be programmed/transformed using an app on a smartphone.

Some of my thoughts on a few of these figures...
Motormaster/Menasor
I feel that it defeats the point of a gestalt by having Motormaster's trailer being the basis of Menasor. It makes the team of Stunticons seem unnecessary when Menasor can be formed without them. And even with the Stunticons plugged into the slots, I get more of a Minicon's tacked onto a larger robot vibe. I think they could have done it better than this figure.

Tarantulas
Looks amazing. I've already pre-ordered one. Seems a little strange they gave him a buzzsaw weapon in addition to the anchor launcher. I guess it's meant to evoke his Transmetal weapon, but... Why does he get two weapons, one of which he didn't even have in this form? Whatever, I'm just happy to see a new Tarantulas figure.
Now bring on Inferno to complete the season 1 BW characters.

Knock-Out
I haven't been liked of any of the Prime figures in the Legacy line. They just don't look right in this aesthetic.

Jhiaxus
Nice to see an original mold for the character, rather than a remold/repaint. The robot mode looks great. Jet mode... Well considering the inconsistent art for it in the comics, it's decent.
Top

Same here, I have wanted a comic-accurate Jhiaxus for a LONG time. 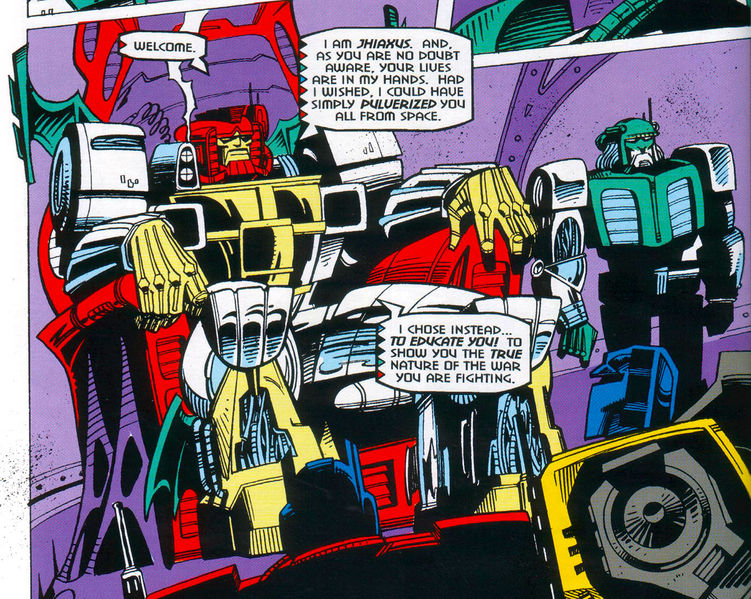 I'm in for Tarantulas. I mean, I actually have a tarantula so it would be weird not to get it. The only other things I'm in for are the core class figures. Especially hot rod we've needed a new version for a while since the last one was so terrible. Also glad to see Skywarp getting a wide release and not some sort of exclusive. If I were still collecting larger figures I'd be in for a lot of these. As for Menasor, there's 2 strikes for me: lack of "scramble city" interchangeability and just plugging them onto Motormaster like Sparky said.
Top

Legacy Metroplex, or Cybertron Universe Metroplex as Hasbro calls it, has been revealed. It's a new version of the character from Giant planet in the Cybertron/Galaxy Force series. New to this version is a flip down welding mask and his "Sparkdrinker" axe can now split in two. The Minicon and Cyberkey gimmicks are not a part of this version however, so his axe does not open up like the previous version did. Interestingly, his boxart shows him fighting Beast Wars Inferno.

Looks like a nice update to the original figure, and good to see a(nother) figure from the Cybertron line again. $200 is a bit much though....
Top

It looks good. But, the price is enough to make me think twice. And, while thinking twice, I cannot help but think of how it should have a Minicon.
http://www.theanimalrescuesite.com/