I see one for Summer and Spring, but none for either Fall or Winter, so that's why I'm starting this one. I figure we can just keep the four season threads going indefinitely rather than one for every month or other year specific threads.

Anyway, HAULS!! Got a lot recently. Shelves for the garage. Got them put together and started putting my wife's stuff in something resembling storage. Hope to have her car in the garage by the end of this weekend. Earthrise Snapdragon, Sunstreaker. Decepticon license plate frames for my current car. MOTU Orgins, He-Man, Skeletor, Evil Lynn, and Battle Cat. G1 reissue Blaster. Haven't opened Blaster, or the MOTU figures yet, but I have opened Snapdragon and Sunstreaker. Both are great figures, I think Sunstreaker is a little bit better only because he pulls off both modes really well. My only complaints with Snapdragon come from the same thing that hinders any triple changer which is not really pulling off any of the alt modes really well, but I will say there were some interesting ideas in the design. I would still recommend it, especially if you have Apeface, they look good together. Sunstreaker is great. I did have an issue with mine missing a wheel, but I'll just make a replacement, so it's fine. I'm also planning to make spoilers for the alt mode. Overall, I'm pretty impressed with this one and looking forward to replacing the predecessor, Universe Sunstreaker, who is a floppy mess at this point. I remember when the Classics/Universe figures came out, I was pretty happy with them, but I don't think we were prepared for how badly these toys would age. Anyway, my only complaint with Sunstreaker is the car roof, the paint is slightly different than the plastic, but it's a minor thing and certainly not a deal breaker for me.
Top

Watching Prime over the past few weeks reminded me that I haven't watched a single Transformers series since that show, and it ended in what, 2013? So I ordered the first season on DVD of Robots in Disguise, since it's the sequel series to Prime, and if we enjoy it we'll watch the rest. Just from the art style it seems like it's going to be lighter and softer, and it looks like Bumblebee is the lead character. I have no idea if it will pick up any plot threads from Prime or revisit other characters from that series, but we'll find out shortly.
Top

Earthrise Fastlane and Cloudraker two pack and 5 shirts from 80's tees.com. Fastlane and Cloudraker are the same as the ones released last year but this time in a two pack that you can order through Amazon rather than having to either A: Buy the Japanese version or B: buy one at retail and then order an expensive exclusive five pack that has the other one. They're good figures and worth picking up, fun to fiddle with. My wife was not imressed with their alt modes LOL. As for the shirts, 3 TF box art shirts, Shockwave, Skywarp and Bumblebee, a Masters of the Universe logo, and a Beast Man shirt.

Oh and Monday was like an early Christmas for my wife and I. She got a bunch of scented candles from both Bath and Body Works and Yankee Candle. I got stuff from BBTS: The Astro Squad Micromaster two pack, the race car Micromaster two pack, Slitherfang, the two headed guy and the other guy that turns into a ramp... thing... look, I have trouble keeping their names straight, BUT, they are fun figures. I particularly had fun combining the astro squad into their space shuttle and putting it on top of Sky Lynx. Because if you like space shuttles on your space shuttle you can put space shuttles on your space shuttles. Also had fun hooking up the ramp guys to Sky Lynx's base mode. Even my wife was amused by it. I also found MOTU Mega Construx figures: Fisto, Teela, Battle Armor Faker, Stinkor. I have others from this line and so far I'm loving it. They look great, have great articulation and best of all, they're cheap! Like $5 each. Of course, I also got some of the new MOTU Origins line since they actually had some of those: He-Man, Skeletor, Evil Lynn, Teela, and Battle Cat. Also got the reissue Blaster.
Top

It's good to have a wife who tolerates the collecting hobby. I remember dragging her to Botcon a few times back in the day. After 20 years, I even catch her quoting the occasional line from one of the shows. "Bulkhead, I needed that!" after one of the kids knocks something to the floor being one of her favorites.

LOL tolerates is about the extent of it, but she at least tries to act like she's paying attention. I appreciate the pretense lol.
Top

Earthrise Scorponok. He's huge, he's awesome and if you can afford it and have room for it, totally worth it. Looks great next to Fort Max. I especially like how they handled Zarak in this figure. He's a double Headmaster now and I didn't see anything on the box indicating a name for the smaller robot that becomes the head of Zarak, maybe that's Zarak too? Still, REALLY well done on this figure. Highly recommended.

Mega Construx Battle Cat/Roton and Panthor/Point Dread. The Roton set is built and is really cool, they even managed to work the rolling and spinning gimmick into it and it works really well. Not finished putting Point Dread together, but so far, it's looking really cool too.
Top

Siege Mirage and Earthrise Fasttrack. Mirage is a definite improvement over Henkei/Classics, despite having the faux car front in the back of the alt mode. It doesn't bother me because I don't display my figures that way so it's never going to be visible on the shelf anyway. And he looks WAY better in robot mode. Fasttrack is... a weaponizer. Basically a partsformer, but that's ok because that's kinda the point. Looks good next to Scorponok though.
Top

Transformers vol. 2 "The Change in Your Nature" arrived today. It has six issues from the Transformers Galaxies series first (the Constructicon and Cliffjumper arcs), and then issues 13-18 from the main Transformers title. It's a sturdy hardcover, and compared against the originals the pages and the art are slightly larger if not substantially so. Like other IDW hardcover collections I've bought, the book has it's own thin ribbon-style bookmark, which is always a nice touch. The issue covers appear where they should, but all logos and other information has been removed. Alternate cover gallery is in the back of the book. It's a low-frill collection, but nicely done and I plan to keep buying these as they become available so I can get them before they go out of print and prices go up. 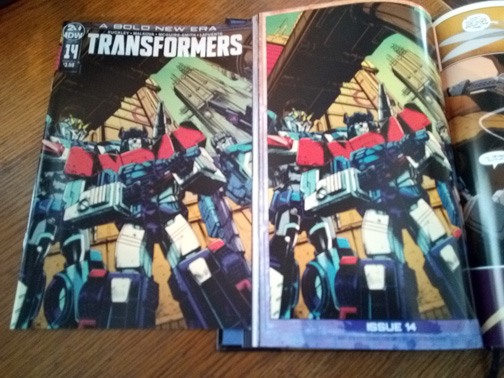 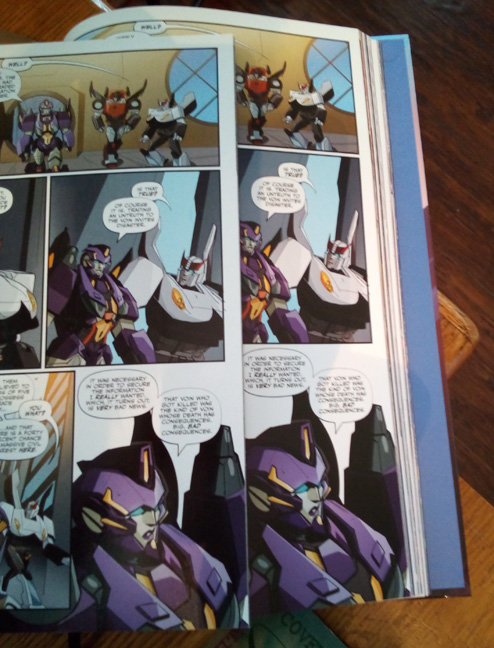 Transformers Siege Refraktor set. The one where they're all different colors and have the special parts for the camera mode. Honestly, I'm glad I sprung for that one instead of just Frankensteining three regular ones together. I like that they all seem like their own separate characters but also part of a team whereas if I had just gone with three regular ones I would have felt like I had just bought the same toy 3 times over (because I would have). Anyway, they're great, I love them and if you can find it for relatively cheap, it's worth it.

Also got the Star Wars: Battle of Hoth battle pack that was a Target exclusive a while back. comes with like, 8 figures of varying quality. Han and two of the Snowtroopers are the best they can get with detail and articulation. The others have less articulation, ranging from 6 - 10 points. Comes with the defense turret and an AT-ST. I've also drastically changed the Hoth shelf in my room to accomodate the new set and it finally looks the way I originally intended it to.

Also got a cd drive and a usb hub for my new computer since USB ports are filling up fast on it.
Top

Lightning Collection MMPR Green Ranger
This is the second release Hasbro has done of the MMPR Green Ranger. The first was part of a 2-pack release with a Putty Patroller. That version was based on the "Fighting Spirit" costume, from an episode of Dino Thunder that recreated several Ranger costumes Tommy previously had. It was not entirely accurate to the original Green Ranger costume, but Hasbro did a really good job making that figure accurate to that version. This single release version is meant to be accurate to the original costume... Unfortunately, unlike the "Fighting Spirit" version, this time Hasbro didn't do such a good job with it. They forgot to paint the diamonds under the shield, which seems like a really strange oversight when they didn't forget the diamonds on the "Fighting Spirit" version, or versions of the Red and Black Rangers they've released with the shield. And given the popularity of this particular Ranger, it's pretty sad that they made this mistake. And it's unfortunate the quality of the Lightning Collection has been pretty bad lately, with other figures missing paint applications as well.

The diamonds mostly get covered up by the shield, so it isn't exactly the most noticeable unless you move or remove the shield, but being one for accuracy with my action figures... I decided to paint them on myself, using painter tape and a MMPR Red Ranger I also recently got a few weeks ago so I could match the diamonds as much as possible. They turned out about as well I'd expected, so overall I'm happy with it. Like I said, with the shield on, it's not the most noticeable, but I think it makes a difference.

Aside from the diamonds missing, it's a really nice representation of the original Green Ranger, but it is disappointing Hasbro would make this big of a mistake on such a popular Ranger (and that they seem to be getting a bit lazy with the Lightning Collection line in general), especially when they got it right the first time around.
Top
Post Reply
77 posts