How is everyone doing in the age of the Corona Virus?

How is everyone doing in the age of the Corona Virus?

Just wondering how all of you are holding up, especially after a month of this. I'm still going to work every day, thankfully, though I work in a small printer and work has really dried up over the past month. We may make enough this month to meet expenses and we may not. Several of our customers have had to make partial payments to us as well, with the stay at home order in place. Traffic during rush hour is way, way down, and if not for the reason, I'd be glad to see that. The toilet paper shelves are still empty everywhere. We had some extra so we're fine, but I decided last week to go looking and went to 12 different stores over two days... empty shelves in almost every store. Found some generic store paper at a Family Dollar and finally found a 12 pack at the last place I looked. They had a truck in earlier that day.

I go to a local park to read on my lunch hour most days, and they have social distancing signs up at each entrance. There's been a police car there a couple of days, possibly watching the park to make sure no one violates the city ordinance or state executive orders. I always sit in my car with the window down, so I already social distance.

Life isn't normal, but it's close enough that I can't complain. How are the rest of you?
Top

I'm doing well. The company I work for sent 98% of our workforce home so we're all still employed, but not at the office. This last weekend we were able to get both paper towels and toilet paper so we're good on both. It's surreal, but we're staying home and staying healthy.
Top

I'm "on pause", as my work is calling it, while only the bare minimum "essential" workers are the only ones allowed in the building to keep the place running. So I've still got my job, but I'm at home until restrictions are loosened. Although a lot of shelves are empty, haven't had any problems getting groceries. We've been able to get everything we need at least. It did take about an hour to get into Costco a couple weeks ago, but last week was no problem. My biggest issue is my fiancee having anxiety attacks from the whole situation...
Top

It's been an interesting challenge. My girlfriend and I want to go outside and do more, but we can't even take a walk in our area because there's so many people violating social distancing out there, and I can't mess around with that because I'm asthmatic and on an immunosuppressant for my psoriatic arthritis. And our area is WAY better about all this than most cities, it's just my building complex really. She got furloughed from her job and so far hasn't gotten word whether she's going to get unemployment (she might not have enough hours last year) so that's been on her mind a lot, her employer may not come out of this.

We go shopping once 10 days or so, and I know my stores so I know how to be safe and to get in and out quickly, the lines to get in don't bother me because they're not too bad. My girlfriend hates that I have to do the shopping for us, but that's how it is, we don't have money to do the delivery thing. And either way, everything we bring into the house has to be sanitized by hand. At least I picked up a bidet attachment a month ago just as this was all turning really bad with shopping, so the toilet paper issue is a non-issue for us.

My girlfriend has been trying to sew masks, sewing's her thing, but her original sewing machine crapped out and was missing a part from when she moved here, the warrantied factory refurb we bought on Amazon is very modern but the cheap gearing drops its timing too easily and that can't be adjusted by the owner so it already had to get taken to a warranty repair, so we found another shop nearby who sold her a much nicer machine they had just started using for sewing classes but it has to go back on Monday because it sounds like it has a loose belt. Meanwhile, since we got the factory refurb, everyone and their uncle has been buying sewing machines so we can't find another one at an affordable price online.

I've been toying with cooking, I've baked a batch of chocolate chip cookies that were mutants and burnt but tasted ok. I made whole wheat naan on the stovetop a couple times with different recipes for each. Last night, I made fried brown rice, that was really quite good but it's a total gut bomb, I still feel full 16 hours later.

Other than that, a lot of movies and video games, trying to hang in there and stay sane. There's definitely a hint of depression at my heels most days, everything takes a lot longer than it used to, but it's not too bad and there's been no huge problems. My car does have a tire that has a slow leak, that's really frustrating, but I have an inflator pump at least.

Glad to hear everyone's getting by for now, though I think the sooner we get through this and back to some semblance of normality will be best for all. I think our business is living off what was paid last month, so next month is going to be really rough, given how slow April has been. Hopefully we won't go under, but it's tough for small business right now. JT, good to hear you guys are making masks. Our church has been asking for volunteers to do that, so my wife has been doing the same thing, sewing more than she wishes she had taken on for a week!

I think the lack of the usual social interaction affects my wife and daughters more than they might realize, but they're surviving. They lose track of time. Last week I mentioned that it had been a month, and my oldest didn't even realize that. She had lost track of time with so many daily or weekly reminders not happening right now.
Top

I'm fortunate to work for a large company that is a non-profit. We do vision insurance, so it's still considered essential. Both my fiance and I work for that same company but we're both doing it from home now. Which is going ok. I don't know if this relationship is going to survive though. There are some issue that are becoming more prevalent with us being together 24/7. As for being home and lacking social interaction, I've always been a homebody anyway so this is just fine for me.

Also, I'm sick of having animals everywhere. When she moved in, she brought three dogs and two cats and the cats are absolutely destroying the place and I've just about had enough of it. But, all of this was there before this happened so... yeah, I don't feel like the pandemic is having any sort of massive negative impact so far.
Top

And now an update. Things are much better between my fiance and I, but unfortunately I lost my job on Friday. I was given a severance package and they are continuing benefits until the end of the month, but I have to once again look for a new job. I have also now joined the millions of people who have filed for unemployment.
Top

I'm glad things are better with your fiance, but I'm sorry to hear about the job loss. I've been there, I was laid off five years ago, and there's not a lot in my experience more stressful than having a family to provide for and bills to pay and having to find a new job. Thankfully I wasn't unemployed for long, and the severance held me over. I hope the search goes well and that you end up with something even better than you had.

It looks like things are starting to open back and up and people are getting back to work here in SC. Traffic has picked up during rush hour the last couple of weeks where it had been nearly dead. Hopefully other areas of the country are experiencing the same thing and work will become available sooner rather than later.
Top

That's awful about your job, Shockwave, sorry to hear it. Best of fortunes with unemployment and the eventual job search.

My girlfriend's sewing machine turned out to be fine, so she's been making masks, figuring out which design is best for what needs, and trying to source materials for better masks.

My electric range had a short in one of the burner sockets and I was planning to fix it, but the range being from the Nixon administration meant it probably needed a rewiring, its oven door was woefully warped, so I ordered a new one. Then I had to order a different new one because Best Buy wasn't doing haul-away and my city has suspended haul-away services for the time being, so I got one from Home Depot who was still doing haul-away, but had to get a cord before delivery (they don't come with cords since homes can have either 3-prong or 4-prong outlets now) and that was a disaster, the first cord came with a scorch mark on it, so I rushed to Best Buy to get another (through curbside) and the one they gave me was used and the wrong length for the range's storage drawer, so after I took delivery at 8am on Saturday which was a whole adventure, I then had to brave the line at Home Depot to get a 3rd cord. I then hooked up the cord, leveled the range, and everything's been ok... except it sticks out a couple inches because the plug is too high compared to where they're expected to be now, but that's alright.

I've been cooking a bit more, I made homemade whole wheat pizza dough and a better batch of whole wheat chocolate chip cookies at the same time as each other 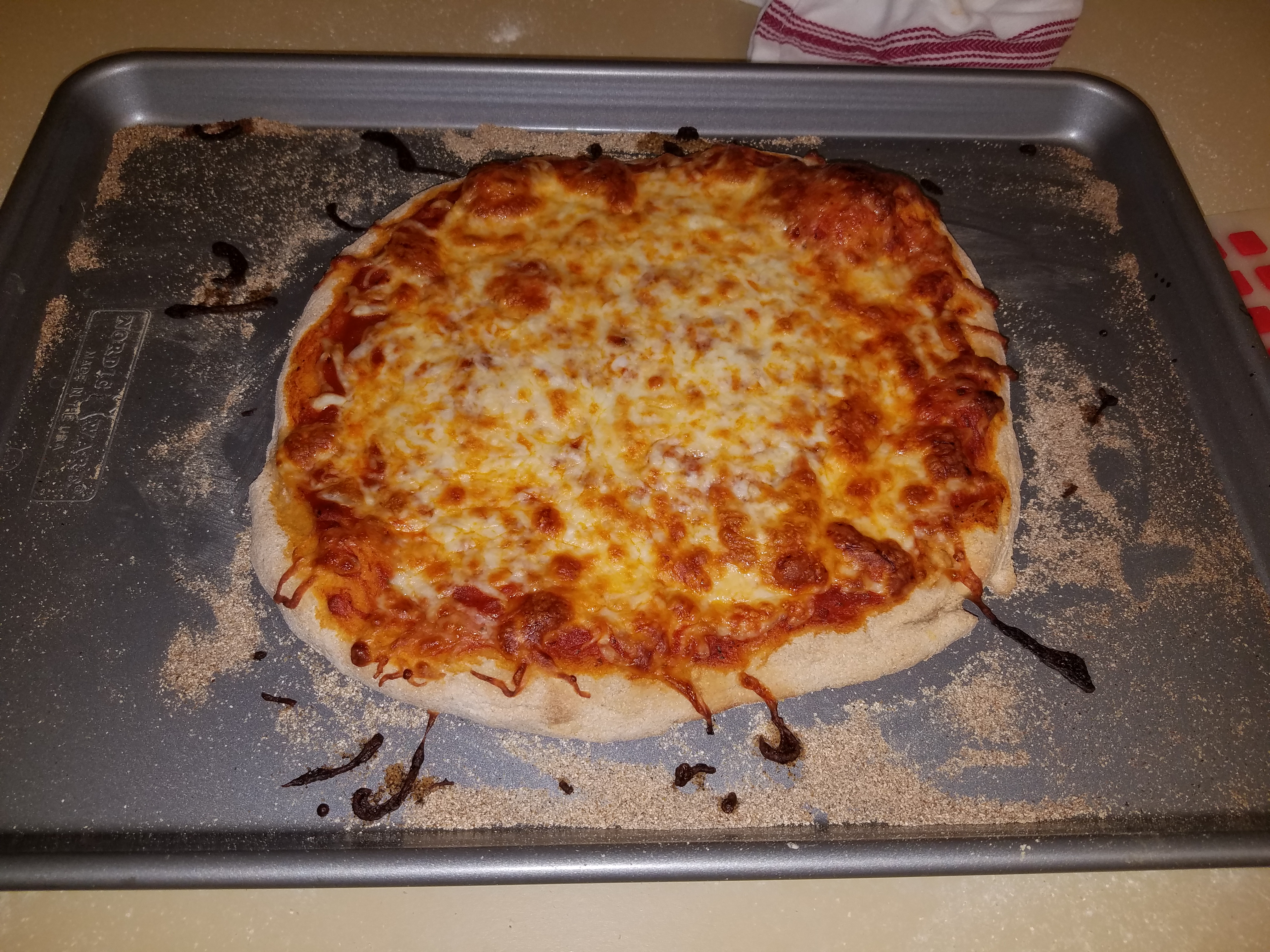 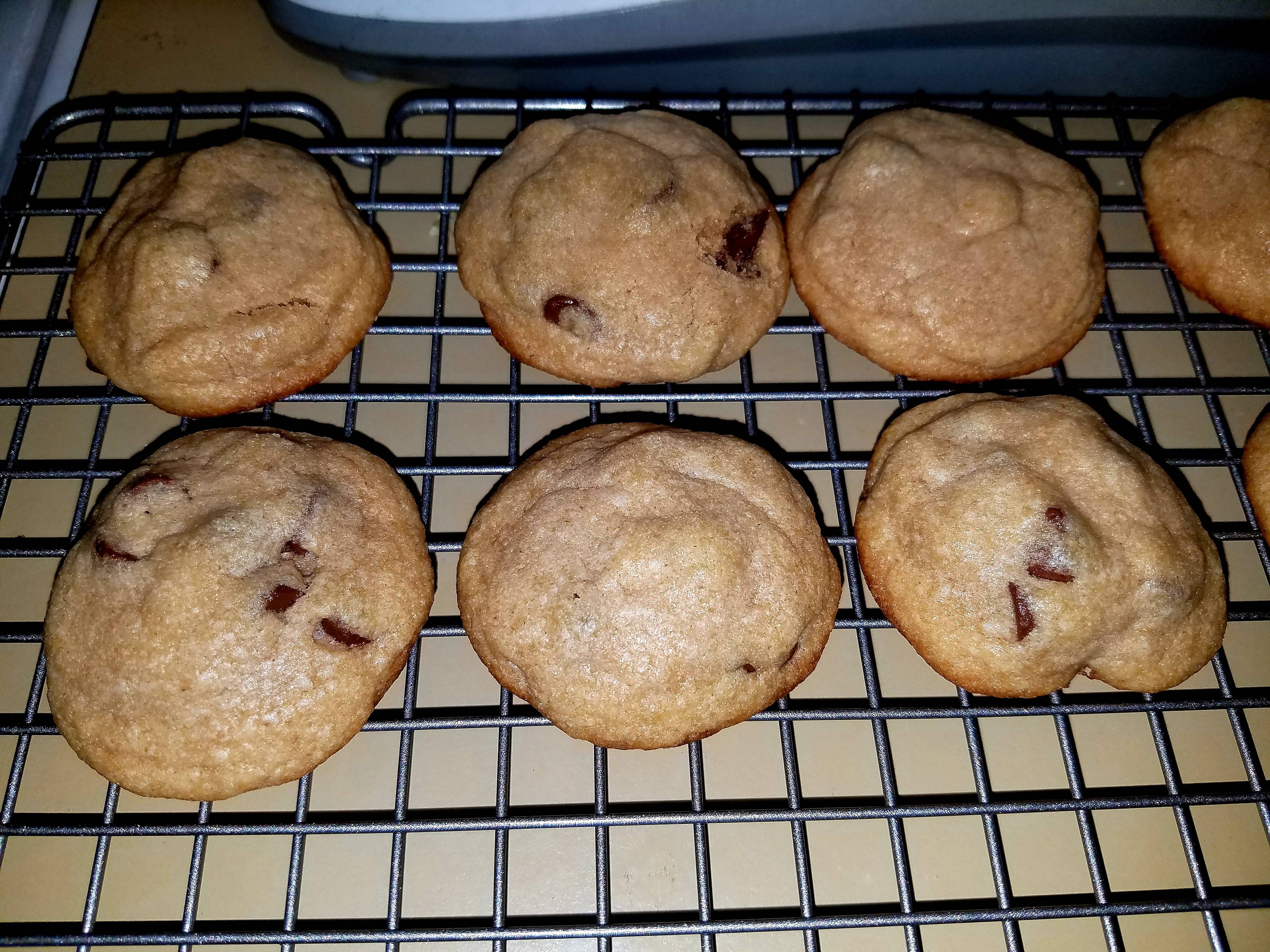 Those cookies were amazing, the pizza less so as it's challenging to get whole wheat to create gluten strands and CO2 pockets large enough to avoid being bready.

I made a pineapple fried brown rice which was good, and we'll be doing more of that today: 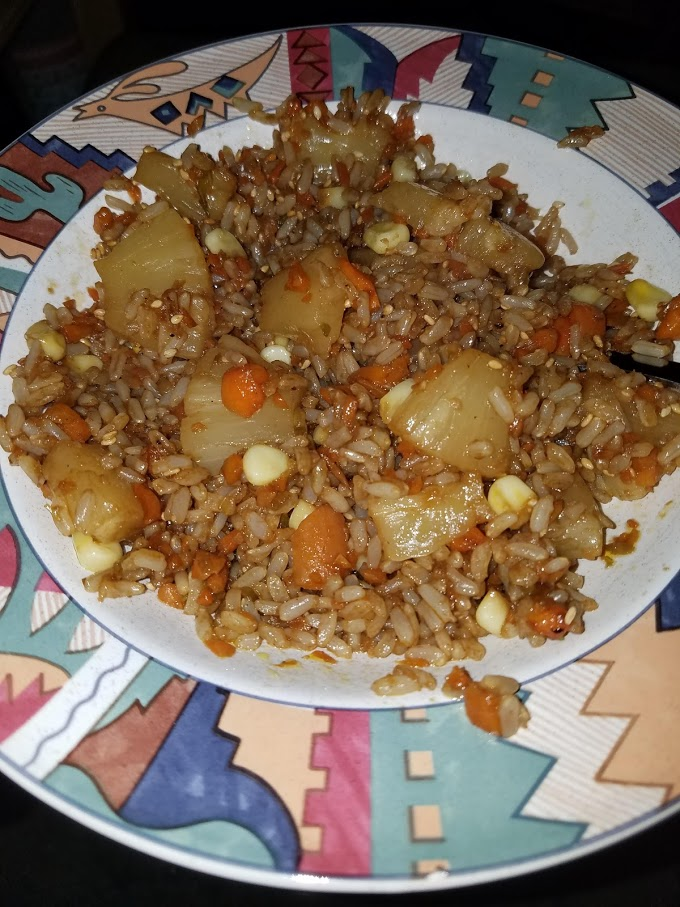 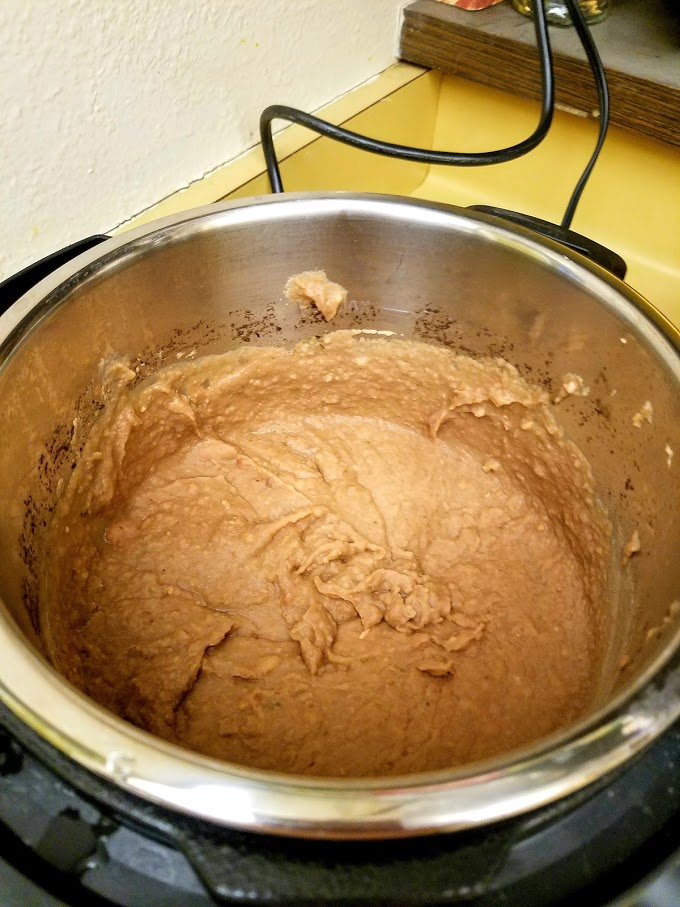 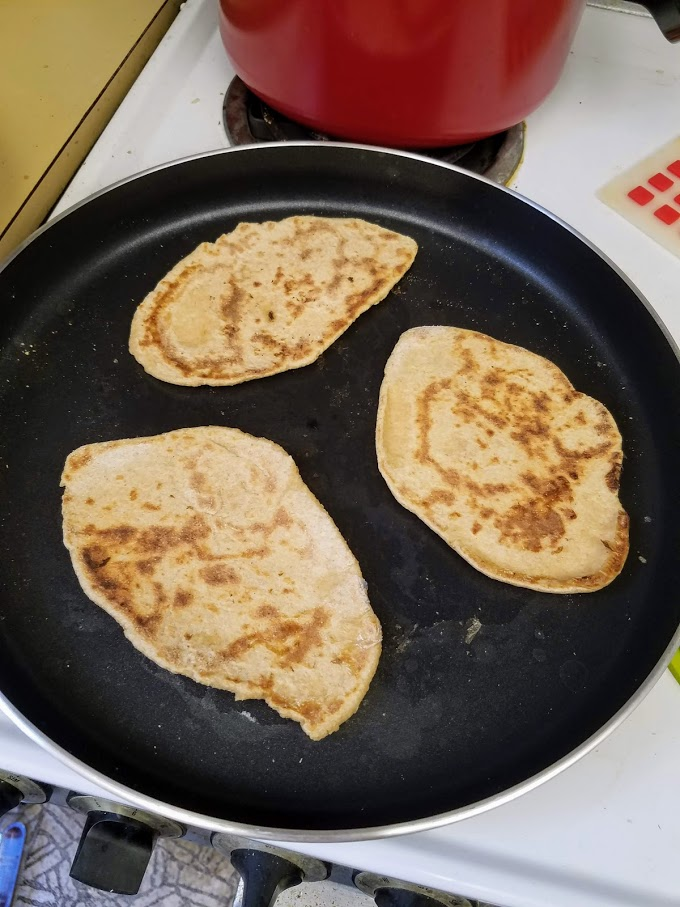 And most recently, these fantastic whole wheat oatmeal craisin cookies: 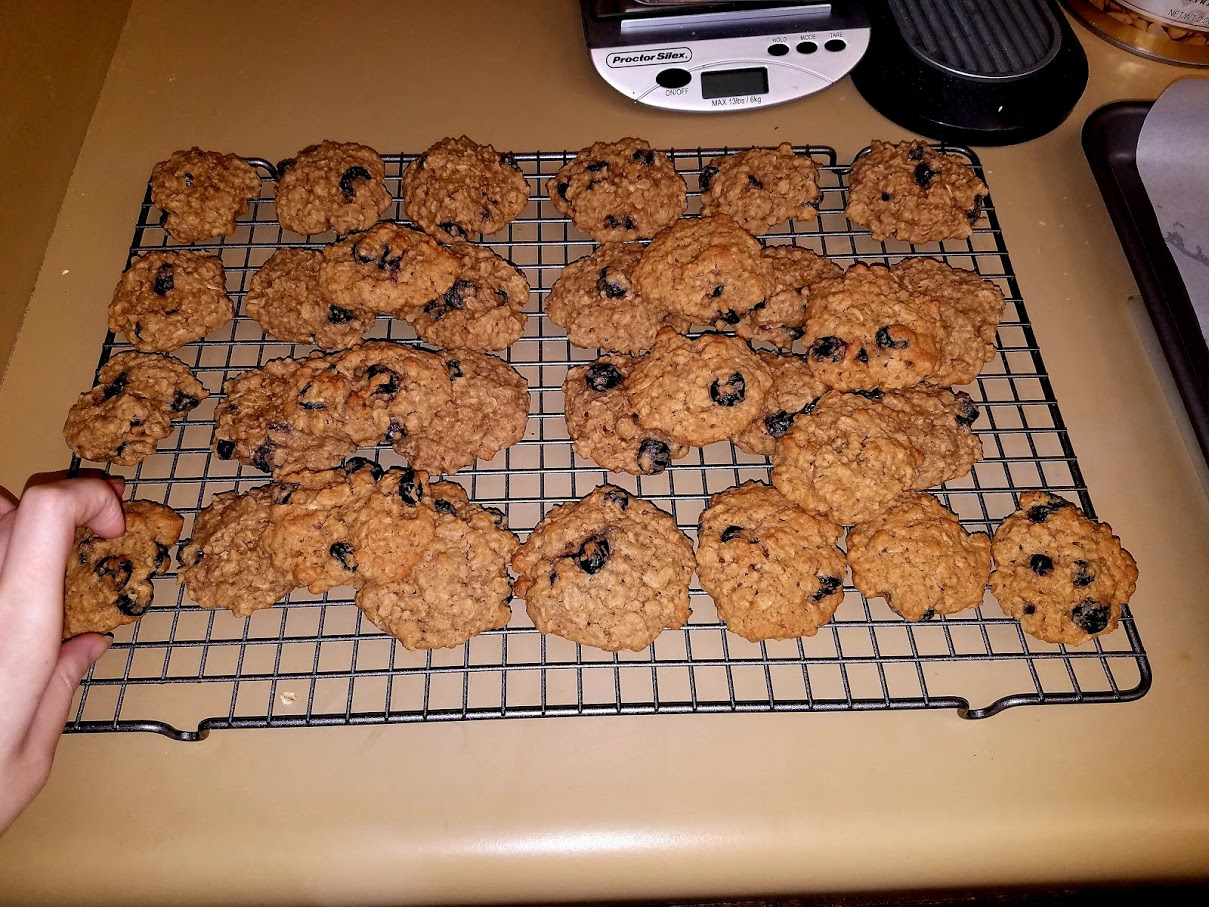 Thanks guys, this isn't the first time I've lost a job so I'm not hugely worried about it, the only thing that really makes me nervous if finding work when so many companies are going out of business. I've never lost a job when the economy was this bad before. I'm currently looking for work in public sector with better benefits and security.

JT, that all looks amazing. We've been cooking at home a lot too, largely because of the diet we're on, which is working really well.
Top
Post Reply
26 posts